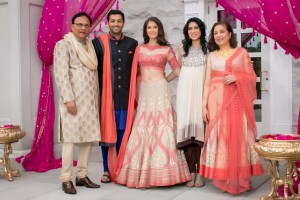 Having no industry specific knowledge, she learned on her feet as she put together a remarkable group of chefs and gained respect from her customers and industry professionals alike.

In 1990 she asked her husband, Satish, to help her expand to Edison, New Jersey, a small suburb of Manhattan that had relatively few Indian immigrants at the time.

As the expansion continued, the Mehtani Restaurant Group became famous not only for its Indian offerings, but also for its Asian restaurants, trendsetting cocktails, beautiful banquet hall, and premiere off-premise catering services.

In 2013, Sneh received the New Jersey Restaurant & Hospitality Association’s Restaurateur of the Year award, which recognized her not only for her success but also for her passion and drive. Sneh & Satish have dedicated their lives to providing their customers with delicious food and warm service, but with this award came time for retirement.

Their son Shaun who recently took-over the family business hopes to raise the name of the Mehtani Restaurant Group in the world of hospitality by continuing his parents’ legacy. He got his undergraduate degree from the Stern School of Business at New York University and his MBA from the Tuck School at Dartmouth College.

Restaurateur Of The Year

Shaun, Son Of Owners Takes Over

The Mehtanis Focus On Fine Dining

The Mehtanis sell of Moghul Caterers, Moghul Express, and Mithaas to focus their attention on the fine dining entities.
2007

The Mehtani family decides to expands its offerings in Morristown. To do so they close the Moghul Morristown. The name Mehtani Restaurant Group is officially launched to brand the companies various entities.
2006

Ming opens in Edison, NJ bringing the flavors from the border of India & China to Edison, NJ.
1995

The lease of the original Moghul Room in NYC expires and the group shifts its headquarters to Edison, NJ.